To see the prospects and not to bow to difficulties. The 6th Youth Forum of the World Petroleum Council came to the end in Saint-Petersburg 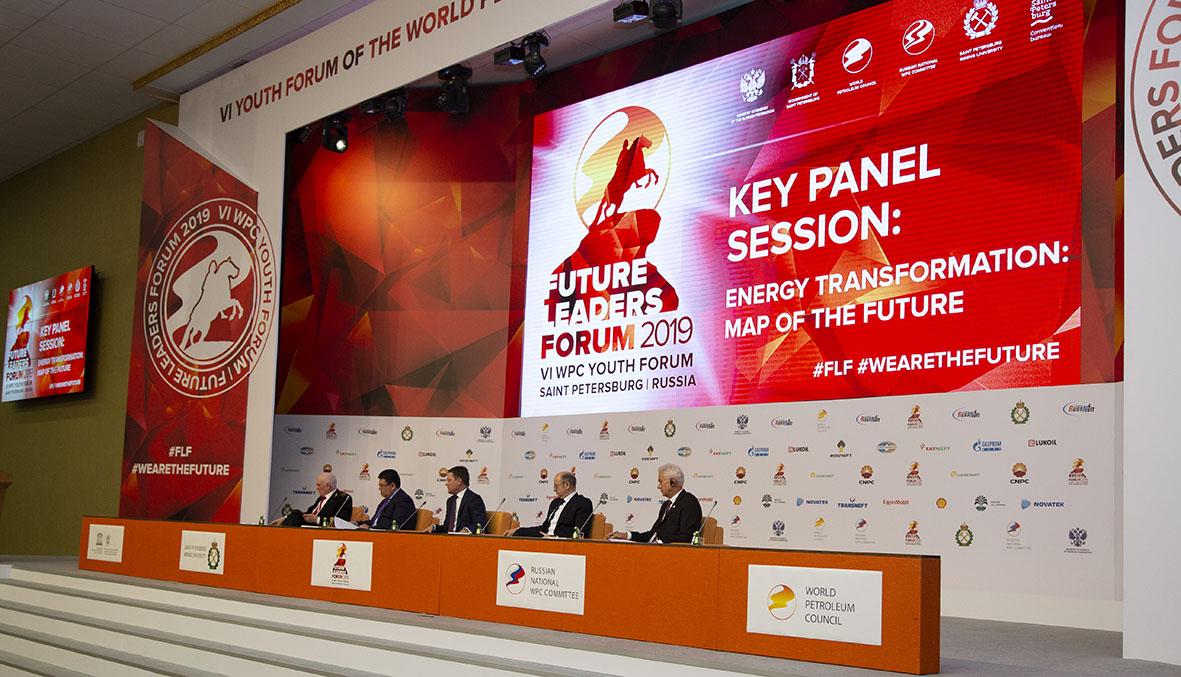 The largest international platform for professional communication of young specialists in the oil and gas industry worked in St. Petersburg on June 23-28, 2019.

The Forum is held every three years, alternately in different countries. It was arranged in Russia for the first time. Two years of hard preparatory work have brought decent results. The Forum was attended by more than 1100 representatives of the oil and gas industry from 62 countries – young professionals, as well as industry managers, experts, and scientists. In terms of the content, diversity, and relevance of the programme, the composition of the invited speakers and the organizational level, the Forum met the most optimistic expectations.

The Gala Opening of the Forum took place on June 23, 2019, at the Mariinsky Theatre in St. Petersburg. Four prominent representatives of the World Petroleum Council and the Organising Committee of the Forum held speeches on the ceremony: Minister of Energy of the Russian Federation, Chairman of the Organising Committee of the Future Leaders Forum Alexander Novak; President of the World Petroleum Council Tor Fjaeran; Director of the WPC Russian National Committee Vlada Streletskaya and Chairman of the WPC Young Professionals Committee Stephane Rousselet.

The culmination of the celebration was the transfer of the old kerosene lamp by Mr. Novak and Mr. Fjaeran to young colleagues. This action was perceived as evidence of loyalty to traditions and continuity of generations.

The Opening Ceremony of the 6th WPC Youth Forum – Future Leaders Forum ended with the Giselle ballet performance, one of the most magnificent productions in the repertoire of the legendary Mariinsky Theatre.

The Technical Programme of the Forum was held at the sites of the Multifunctional Complex "Gorny", a well-equipped and hospitable modern complex owned by St. Petersburg Mining University. On the morning of June 24, Valentina Matvienko, Chairman of the Federation Council of the Russian Federation, was hosted here.

"Russia has never used and will not use its energy resources and opportunities as levers of economic or political pressure," Ms. Matvienko said, addressing the Forum participants from the tribune, which represent a wide range of countries – oil suppliers and consumers.

Vice-Governor Oleg Markov welcomed the guests on behalf of the Administration of the city of St. Petersburg. He voiced a hope that the Youth Forum will give a new impetus to the development of modern technologies in the field of oil production and processing.

President of the Russian Federation Vladimir Putin sent greetings to the participants, organisers, and guests of the Forum. "It is on you, young leaders, on your readiness to make bold, non-standard decisions, to achieve your goals, to build up an equal and mutually beneficial partnership – the future of the oil and gas complex, its competitiveness and expansion of the resource base largely depend," - noted in the greeting of the head of the Russian state, which was read out by the Advisor to Chief of Staff of the Presidential Executive Office, Deputy Chairman of the Organising Committee of the Forum, Kirill Molodtsov.

The right to open the Forum was granted to the Chairman of the Organising Committee of the 6th Youth Forum of the Ministry of Energy of Russia Alexander Novak. "It is obvious that today when the world economy is entering the stage of economic transformation, it is important to ensure the maximum involvement of young professionals in the global energy supply. Such platforms as the Forum help to achieve this goal, reduce uncertainty in the market," Mr. Novak said, addressing the Forum participants.

The ceremony was conducted by rector of St. Petersburg Mining University Vladimir Litvinenko. He noted that the Forum brought together professionals, masters, people representing the main sector, which largely determines the pace of economic development. "I would like to wish everyone a successful discussion and fruitful, effective work for the development of the oil and gas sector. The Mining University, as a platform of the Forum, tried to create all conditions for this," rector said.

The first Plenary Session was devoted to the discussion of the key topic of the Future Leaders Forum: "Energy Transformation: Map of the Future". Ministers of Energy participated in the discussion: Parviz Shahbazov (Azerbaijan), Kanat Bozumbayev (Kazakhstan) and Alexander Novak (Russia), as well as the President of the World Petroleum Council Tor Fjaeran.

At the next Plenary Session, "CEO-2030: what is required from future leaders" topic, which is no less informative for young delegates, was discussed. The special value of this conversation was that experienced managers who have achieved significant success in the industry shared their thoughts and observations. Namely, Azat Shamsuarov, Senior Vice President of PJSC LUKOIL; Marina Sedykh, Head of Irkutsk Oil company; Cederic Cremers, Executive Vice President and Country Chair Russia at Shell; Zhou Jiping, former Chairman of PetroChina Company; Arman Tuyakov, General Director of KMG Kashagan; Denise M. Cox, President of the American Association of Petroleum Geologists (2018-2019). The moderator of this fascinating meeting was the Chairman of the Committee of the WPC Young Professionals Stephane Rousselet.

Perhaps, the most anticipated event of the second day of the Technical Programme of the Forum were Youth Technical Sessions. 75 students and young professionals from around the world reported on the results of their research. 9 thematic sessions were held in parallel. This format is not new in the practice of the WPC Youth Forums. However, for the first time, the preliminary selection of speakers was held as an open competition. Each young person had the opportunity to apply for participation with a brief description of their own scientific work. Putting estimates, members of the Competition Commission did not know who owns this or that work.

The winners of the preliminary stage received invitations to the Forum. They were exempted from paying the registration fee. At the initiative of the administration of St. Petersburg Mining University, young participants of the competition have the opportunity to publish their scientific work in the collection indexed by Scopus, Web of Science.

In total, without taking into account Youth Technical Sessions, the Technical Programme of the Forum included 28 discussions on the most topical issues of the industry. They were held in different formats: plenary and panel sessions, round tables, forums, and open dialogues. The entire programme was structured in three main areas: Leadership, Innovation, Sustainable Development.

Lively and dynamically, in an atmosphere of excitement and creativity, Shell organised an educational seminar NXplorers. In a fun way, the programme teaches how to search for and find solutions to complex problems as well as develops critical thinking and teamwork skills.

The Russian National Committee of the WPC invited to the Forum the winners of the “Golden Legacy” scholarship. The Russian Minister of Energy Alexander Novak and the President of the World Petroleum Council, Tor Fjaeran, presented the diplomas and memorable awards to the brightest students in a ceremonial atmosphere.

On the last day of the Forum, technical tours – educational trips to various objects of urban infrastructure and oil companies – were offered to the participants. Among the objects, there were “Gazprom Neft Science & Technology”, Multifunctional Complex “Lakhta Center” and other facilities.

An international group of the Forum participants took part in an environmental campaign: the installation of an artificial spawning ground in the Gulf of Finland. This is a joint project of the International Charitable Public Association "Biologists for Nature Protection" and the Russian National Committee of the World Petroleum Council. It is aimed at improving the environmental situation in the waters of the Gulf of Finland, where the pollution and destruction of traditional habitats and spawning of various species of fish exacerbated the problem of conservation and reproduction of marine fauna. In addition to a great Technical Programme, the participants of the Future Leaders Forum were offered a diverse Cultural Programme. In particular, it included a visit to the Hermitage, Neva Cruise, and bus city tours. In addition, a small football tournament was held among the participants of the Forum.

According to many guests’ feedback, the Forum in St. Petersburg has become the best youth event of the World Petroleum Council. It will be very difficult for the followers to exceed the level shown by Russia.

The success of the 6th WPC Youth Forum was the result of the hard work of a large number of people and organisations. The Ministry of Energy of the Russian Federation and the Administration of St. Petersburg played an active role in organising the preparations for the Forum. The leaders of the Mining University, and personally rector V. Litvinenko, took care of the comfortable conditions for all the participants of the Forum.

During the Forum, an important role in creating the atmosphere of hospitality was played by members of the international volunteers’ team. 200 volunteers, who were selected on a competitive basis and then trained, helped the organisers and guests of the Forum in solving everyday issues.

“We had ambitious plans to hold the Forum at the highest level of hospitality,” said Vlada Streletskaya, director of the RNC WPC. - We managed it. The support of state and municipal authorities, the management of the Mining University helped a lot. I would especially note the role of oil companies - Russian and foreign. Their sponsorship helped materialize dreams and arrange an unforgettable holiday for young professionals who came to St. Petersburg from all over the world. ”

The work of the Forum was covered by more than 100 journalists representing dozens of Russian and foreign media. The TV channel "Russia 24" conducted a live broadcast of the official Opening Remarks of the Forum. An online broadcast of all plenary sessions was organised in Russian and English.

The Closing Ceremony of the Future Leaders Forum was held in Konstantinovsky Palace, located on the picturesque coast of the Gulf of Finland. In this residence, Russian leaders receive important guests. During the ceremony, Kirill Molodtsov, Advisor to Chief of Staff of the Presidential Executive Office, Deputy Chairman of the Forum Organising Committee; Tor Fjaeran, President of the World Petroleum Council; Director of the Russian National Committee of the WPC Vlada Streletskaya addressed the audience. Kirill Molodtsov expressed his gratitude to the World Petroleum Council for the opportunity to hold the Youth Forum in Russia, St. Petersburg. Tor Fjaeran praised the efforts of the Russian side to hold the Forum at a high level. “It was a well-organised Forum,” admitted the President of the WPC. According to him, the World Petroleum Council pays special attention to working with young people, the Forum is a very effective platform that helps young people show leadership skills.

A large stylized globe like a sports champion's cup was brought to the stage. “Now the Youth Forum has its own mascot,” explained Vlada. - On this globe, we will mark the cities where our Forums will be held. We will hand over the globe to the National Committee of the WPC of the country that will be chosen as a host of the 7th Youth Forum. And may it always be. ”

The completion of the Forum was no less striking than its entire previous programme. Representatives of various musical genres performed at four areas of the huge park. The evening ended with fireworks and a disco.