The triennial World Petroleum Congress is widely known as the "Olympics" of the petroleum industry and covers all aspects of the industry from technological advances in upstream and downstream operations to the role of natural gas and renewables, management of the industry and its social, economic and environmental impact. In addition, outside stakeholders such as governments, other industry sectors, NGOs and international institutions have also joined in the dialogue.

The 23rd World Petroleum Congress, come off in Houston (USA) from 5 to 9 December 2021. During five days more than five thousand delegates representing about 70 countries discussed the most important issues of the future development of the planet's energy industry. Much attention was paid to the role of the oil and gas industry in achieving the goals of sustainable development, ensuring energy needs and reducing the carbon footprint.

Russian National Committee of the World Petroleum Council played a significant role in shaping the Congress programme. Following a competitive selection process, our country's representatives were appointed as Chairs and Vice Chairs of seven congress forums and were directly involved in inviting and selecting speakers and setting the thematic focus of the discussions.

The 24th World Petroleum Congress is scheduled to take place in Calgary, Canada, in September 2023. The main theme is “Energy Transition: The Path to Net-Zero”. The programme of the Congress will include 17 technical forums, each of them will address specific issues on the strategic agenda.

Delegates gathered for a group photograph to mark the first World Petroleum Congress. 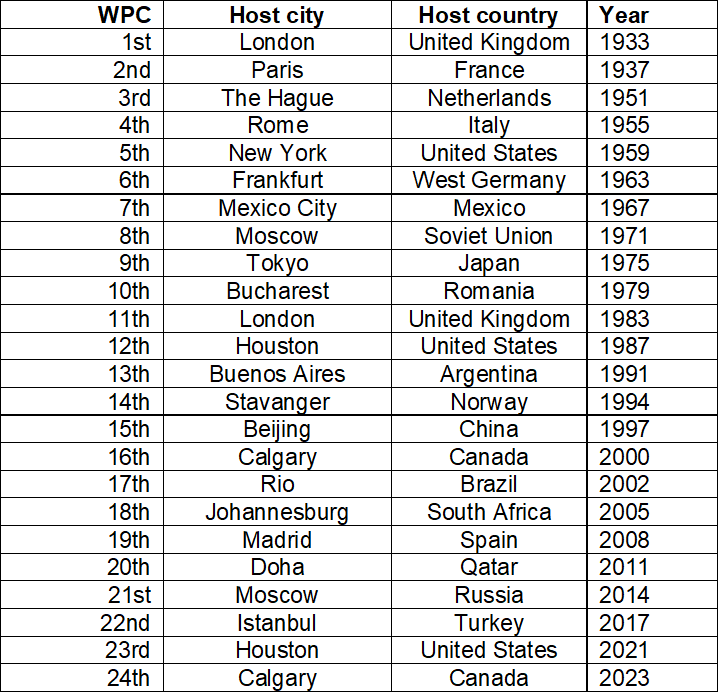