Saint-Petersburg hosted the final stage of the EnerGenious case marathon. 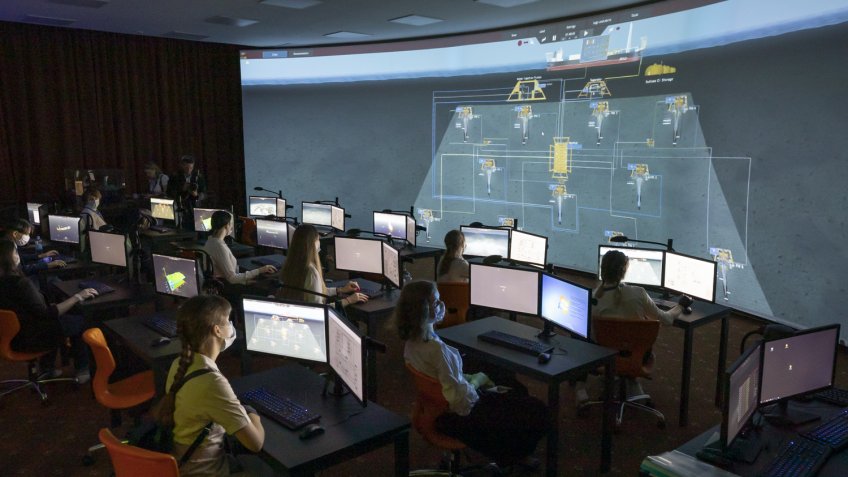 Four teams, each of which involved high school students from St. Petersburg, Nizhnevartovsk and Izluchinsk (Khanty-Mansiysk Autonomous Okrug – Ugra), presented projects for the development of an offshore oil and gas field that they prepared during a case marathon. The final stage started with assembling of offshore oil and gas platforms models they created in accordance with the project documentation of the tender works.

The projects carried out by the schoolchildren were evaluated by a representative jury, which included Kirill Molodtsov, Advisor to Chief of Staff of the Presidential Executive Office, Irina Potekhina, Vice-Governor of St. Petersburg, Yuri Yuzhakov, Deputy Governor of the Khanty-Mansiysk Autonomous Okrug – Ugra, Vladimir Litvinenko, Rector of St. Petersburg Mining University; Victor Martynov, Rector of Gubkin University, Valery Yazev, Chairman of the Russian National Committee of the World Petroleum Council, Vladimir Borzenkov, Director General of the International Competence Centre for Mining-Engineering Education under the auspices of UNESCO, heads of specialised committees of the St. Petersburg Administration and the Government of Khanty-Mansiysk Autonomous Okrug – Ugra, as well as specialists from Gazprom Neft – programme authors and team mentors, other experts.

The case marathon started on April 25 and lasted for three months. The event was held in the format of a business game, combined with online training. The tasks of the programme corresponded to the tasks solved by specialists in a real environment using technical solutions from leading companies in the industry. Each team was assigned mentors who advised the participants and were in constant contact with their mentees.

The remote part of the case marathon was divided into three stages (Assess, Select, Define), similar to the stages of a large-scale offshore field development project that are in reality. At the end of each stage, reports on the work performed were remotely evaluated. The tasks of the final stage, held in St. Petersburg, corresponded to the Execute stage. At this stage, time and budget limits were taken into account, as well as the ability of contestants to achieve their targets.

Teams of participants of the programme were formed from high school students of St. Petersburg and Khanty-Mansiysk Autonomous Okrug – Ugra, who were trained in RNC of the WPC Winter Schools "EnerGenious" in Nizhnevartovsk and Stavanger, Norway. The programme of the case marathon was focused on consolidating and deepening theoretical knowledge acquired by high school students in winter school classes, developing teamwork skills and solving practical problems.

The victory in the case marathon was won by "Duker" team consisting of Yulia Babak and Ekaterina Shalyakina from Nizhnevartovsk, Maria Vasileva from St. Petersburg (all passed to the 11th grade). All high school students who participated in the “EnerGenious” case marathon will receive additional points when entering the Gubkin University or St. Petersburg Mining University. The members of the winning team will have a greater advantage when entering these universities.

Maria Vasileva won the individual competition. She is the one who will receive the educational grant – the main prize of the RNC of the WPC case marathon.

"We have organised classes at the winter school and a case marathon under the joint name "EnerGenious" to arouse young people's interest to the oil and gas industry, to show them the production realities and tell them about the prospects, to give them the opportunity to test their strength and think about their place in the industry," explained Vlada Streletskaya, director of RNC of the WPC. – The results even exceeded expectations. I was pleasantly surprised by the high level of projects presented today. By results of the survey we saw positive dynamics of the programme participants’ attitude to the industry. Many of them reported that for the first time they thought about an opportunity to connect their professional future with the oil and gas industry".